An original
Walter David “Bud” Fackler made such an impression on his Executive MBA students at the University of Chicago Booth School of Business that they still keep in touch with his widow, Hazel Fackler. In fact, after his death in 1993, his students began fundraising for scholarships in his name, which turned into a campaign to fund the Walter David “Bud” Fackler Professorship. At the time, the gifts from the initial 763 donors marked the largest such pooled gift fund in the school’s history. “Every one of his students seemed to have a special story that they like to tell about him,” says Hazel Fackler. “Every single one of his students was special to him.” His students were not the only fans of Bud Fackler, whose legendary generosity extended to all in his sphere and helped bolster the fledgling Executive MBA industry. At the University of Chicago, which initiated the first EMBA Program in 1943, Bud Fackler embodied openness and a willingness to share. Indeed many administrators and faculty visited the University of Chicago to talk with Fackler and observe the Chicago model before they put their program in place. Bud Fackler’s generosity and spirit was carried forward in the organization that he helped found, the EMBA Council. The council, in turn, honored him and his efforts by establishing the Bud Fackler Service Award, which recognizes contributions to the EMBA Council and to EMBA Programs worldwide, including efforts to help other programs, to share best practices, and to raise the quality of EMBA Programs. Bud Fackler was the first recipient of the award in 1987.
The most recent winner: Sylvia Haas 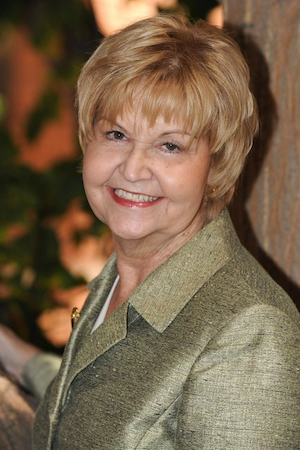 At the time Sylvia Haas made a switch to EMBA, her associate dean suggested she attend a regional EMBAC meeting to gather all necessary information to meet the enrollment target in six months.

“Believe me, I implemented every best practice I learned in that meeting within the scope of my school and my program,” says Haas. “And the result was that July we filled a class.”

That regional meeting kicked off a long-standing association with EMBAC that resulted in Haas’ selection as recipient of the 2021 Bud Fackler Service Award.

The Bud Fackler Service Award recognizes contributions to EMBAC and to EMBA Programs worldwide, including efforts to help other programs, to share best practices, and to raise the quality of EMBA Programs. The council named the award after Bud Fackler, the late director of the EMBA Program at the University of Chicago and one of the council’s founders.

“Bud Fackler’s reputation for generosity, spirit, and building meaningful and memorable relationships with students and each other is the core of EMBAC,” says Haas. “It is such an honor to be named the recipient of this year’s Bud Fackler Service Award.”

“It became very clear to me early on that I couldn’t afford to miss a single conference, not a single regional meeting,” she says. “And it was always gratifying to go to a conference and to learn we were doing some things right and at the same time we all had the desire to learn innovative and more effective ways to make our programs better, and EMBA Council does that for us.”

Haas also lent her talents to the council, co-chairing the 2010 EMBAC Conference in Vancouver, serving on the EMBAC Board of Trustees from 2014 to 2017 and the EMBAC Membership Committee, and hosting and presenting at regional meetings throughout the years.

Her support within the EMBA industry is also well-known.

“During her career working for EMBA Programs, Sylvia has almost taken on celebrity status among those who work in our world,” says Jon Kaplan, assistant dean for the MBA and Specialty Master’s Programs for The Paul Merage School at UC Irvine. “She has befriended seemingly everyone and anyone who has ‘EMBA’ in their title, while also establishing herself as a leader in the industry.”

Her EMBA career path began in 1999 at UC Irvine and included the position of senior associate director of the EMBA and HealthCare EMBA Programs.  In 2008, Haas joined the UCLA Anderson School of Management’s Executive MBA Programs as executive director of admissions, overseeing a period of growth. In 2018, Haas returned to the Merage School and the UCI EMBA Program. In June 2021, she retired from UCI Irvine.

“In our time in higher education, seldom have we seen one person make an impact on our work as deeply and as broadly as Sylvia Haas,” says Kaplan. “Over a 20-plus year career in the EMBA space, Sylvia has influenced and transformed career services, admissions, and curriculum at two major universities: UCLA and UC Irvine, while also becoming a leader and major contributor to EMBAC.”

“It was truly a privilege to work with Sylvia,” says Desiderio. “She was a role model of what board service should look like, and an ideal recipient for the Bud Fackler Service Award.”

Haas valued what she learned from EMBAC members and the relationships that she formed through her time with EMBAC colleagues.

“Any contribution that I have made as a member was multiplied many times over by their contributions to my professional growth, through personal and professional relationships and the mindset of sharing best practices,” she says. “I will miss this organization.”

The council announces the Bud Fackler Award winner at its annual conference. The list of past winners includes the following outstanding leaders.

Receiving the award also made me feel very proud to be part of a group that creates and sustains a strong collegial culture, much like our students experience in our programs…I remain proud to have been part of an organization whose primary goal was and continues to be creating value for its members.

In 2004, and still today, it meant everything to be the only organization to have been honored with the Fackler Service Award. It was an acknowledgement from an organization we greatly respect – the EMBA Council – that we were succeeding at staying true to the purpose given to us by schools when they created GMAC in 1953.

It was a humbling honor to be recognized by peers, and motivating too, as affirmation usually is. I think recognizing a member of a European school really helped other member schools from around the school see their part in the council. Now I am so proud of the council when I see the long list of members from all around the world, and so many different nationalities represented on the board.

I wanted to give back to the council as much as I could. I think that is the beauty of the council—when people from 300-plus programs come together and contribute their ideas to help each other learn and grows.